Help Us Save the Vaquita!

Fewer than 20 vaquita porpoise remain in the wild… and you can help save them! Join the campaign and, along with the Mexican Association of Habitats for the Interaction and Protection of Marine Mammals (AMHMAR), help the efforts to preserve and protect these amazing marine mammals from the Upper Gulf of California.

According to the latest estimate, the vaquita population has dropped from about 600 individuals in 1997 to fewer than 20 and continues to decline at an alarming rate. 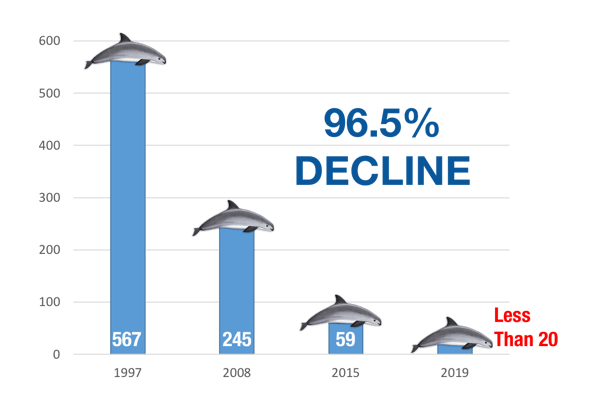 The main reason: the irresponsible fishing in the northern Gulf of California (Sea of Cortez) of totoaba fish, also in danger of extinction.

The problem is that poachers–who seek to capture totoabas to sell them in the Chinese black markets–use gillnets, which is an illegal kind of large-size net that catches masses of other marine life, including vaquitas, which get entangled in these nets and drown.

That’s why international and non-governmental organizations have called for a ban on gillnets, which pose a major threat to whales, porpoises, and dolphins around the world since they can kill up to 300 thousand individuals of marine mammals every year.

Hope For the Future

The main goal is to support local fishers and organizations working to implement and enhance these efforts.

VAQUITA EXPEDITION UPDATE: A vaquita mother and calf were sighted! The VaquitaCPR team is hopeful that vaquitas may have a chance to rebound.

How Can WE Help Vaquitas to Survive?

If like the rest of us you wish for the vaquita’s survival and well-being in the Sea of Cortez for many years to come, you can join the donation campaign set up by the AMHMAR and enforced by their members, including Delphinus.

As the rest of the AMHMAR members, Delphinus will donate one peso or one dollar for each peso or dollar that you donate.

All donations go straight to Museo De La Ballena, in charge of coordinating the field efforts and ongoing conservation measures to protect vaquitas.

It’s worth to mention that, up to July 2019, Delphinus and its visitors–who came to swim with dolphins in Mexico at one of its 7 sanctuaries in Cancun and Riviera Maya–have helped raise around $19,906 US dollars that were donated to the VaquitaCPR initiative, funded by the National Marine Mammal Foundation (NMMF) and the main platform that supports the Project Esperanza efforts.

Learn more about the vaquita situation in this video:

If you want to participate but you don’t know how, just click here and discover some of the solutions and latest updates on the efforts. Your aid is needed more than ever!

Share this information! Together, we can help spread the message and support ongoing conservation efforts through Project Esperanza by making a donation.

Remember: for each peso or dollar that you give, we'll give another! Every amount counts!

Why Should You Swim with Dolphins in a Certified Habitat?
June 14, 2021
Read more