What Does Xel-Ha Mean? And Other Amazing Facts about Xel-Ha Park

Xel-Ha is more than just one of the best aquatic parks on the planet. And this is so much so that every corner tells a story about the magnificence of nature, the resilience of the human spirit, and the hope for the future.

Because we'd like you to get acquainted with this incredible place, here we share with you 5 facts that we're sure will amaze you and make you want to visit this hidden wonder of the world.

1. The Ancient Mayans Named it After... 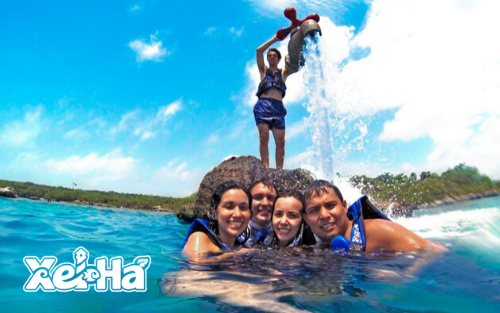 If you've heard it mentioned before, you definitely must have thought to ask: "What does Xel-Ha mean?". Here's the short answer: it's the place "where water is born".

According to legend, the Mayan gods joined together their wisdom, illusions, and love of beauty to create a safe haven that brought together the best of nature. Once they finished, the gods were so pleased with this heavenly spot that they decided to allow humans in, who used it as a place of pilgrimage and shelter.

But this tale gets even better: to protect their work, the ancient gods appointed three guardians to watch for Xel-Ha: Huh, the Iguana, Guardian of the Land; Chuc Kay, the Pelican, Guardian of the Air; and Kay Op, the Parrotfish, Guardian of the Water. Some say that these guardians still take care of the Park and everyone who comes to visit.

2. It's One of Only Two Places in the World to do Dolphin Trek 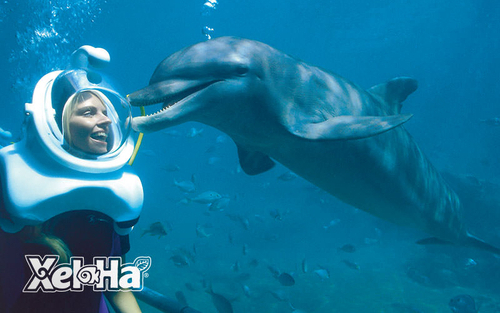 To swim with dolphins in Cancun is definitely one of the most incredible experiences one can have. However, being underwater with these marine mammals is something that you can only do in two places in the world… and Xel-Ha is one of them!

Of course, you'll be required to wear a special helmet (Sea Trek) designed to dive, that only this Delphinus sanctuary has for this activity with dolphins, in an entirely natural environment. 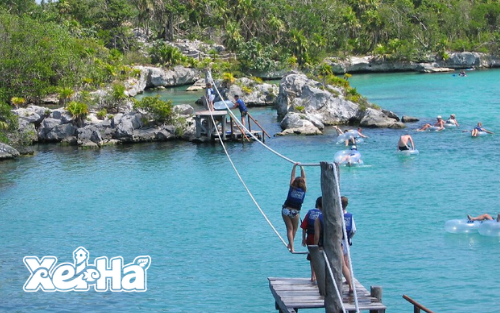 Did you know that Xel-Ha is the world’s most sustainable park? In 2014 it became the first company in the world to earn EarthCheck's Gold International Certification for 5 consecutive years of excellent results, awarded by the world’s leading scientific group for benchmarking, certification, and advisory of the travel and tourism industries.

Also, the Park has received the Distinctive as a Socially Responsible Company and the Trip Advisor's Excellence Certificate.

On top of that, it has implemented various Preservation and Conservation Programs of Threatened Marine Species, such as the Queen Conch (Strombus gigas) and white turtles.

4. It Works with the Environmental Education Program for Public Schools of Quintana Roo 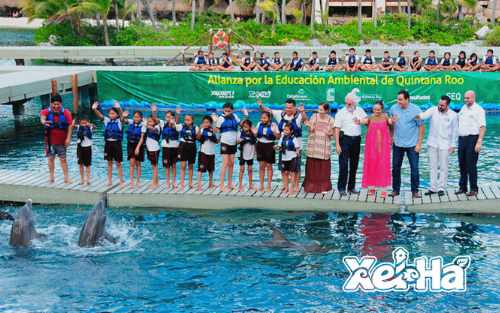 Because caring for the environment starts by educating the little ones, the Park administration, along with the State Government and Delphinus, invite around 6,500 students annually to visit Xel-Ha and have an interaction with dolphins for free.

Through this program, kids learn actively about the importance of preserving the natural resources of Quintana Roo, the Mexican Caribbean and the rest of the world.

5. It Has One of the Largest Dolphins Conservation Sanctuaries in Cancun 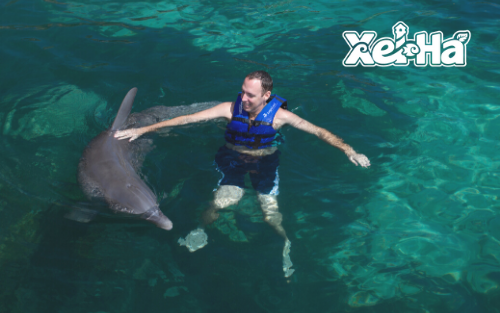 The Park has 5 areas where its guests can swim with dolphins. These spaces make for an experience very close to interacting with them at their natural habitat.

Besides, we follow the best practices in veterinary medicine, training, and design of facilities, for the constant welfare of our dolphin population.

6. It's Considered One of the World’s Biggest Natural Aquariums! 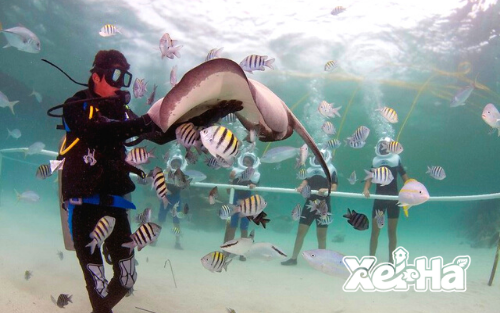 That’s right! Due to its extension, it can fit 84 professional football fields!

No wonder Xel-Ha's cove is the port of entry for the longest system of underground rivers in the world, and the home of 400 species of plants, animals, and fish of different colors and sizes that live freely in this protected ecosystem.

Also, within its territory you can find a whole lot of underground caves, as well as some Cenotes and lagoons: the Cenote Aventura, the Cenote Paraiso, the Ixchel Grotto, and the Black Lagoon, just to name a few.


Don't miss out on this natural beauty! Enjoy this magnificent place for a whole day with an all-inclusive package, so you can swim with dolphins in Xel-Ha, learn more about the Park's story, and help preserve it for the next generations… just by visiting!